Created in 1996 by Zahaah, HIMINBJORG share their first creations in 1997, with their demo ‘Hedning’ featuring folk sounds, telling of the pagan thoughts of artists. The tape format distributed by post reflects a time when productions of interest were mostly confidential.

In 1998, the group is signed on the American RedStream label, and releases its first album, “Where Ravens Fly” featuring warlike metal tones.

The tribal dimension of their work remains present and is complimented by long etheral athmospheric musical passages. HIMINBJORG becomes renowned internationally and plays at several gigs.

The second, darker album “In The Raven’s Shadow” ( 1999) constitutes a progression towards a black metal with a more elaborately constructed sound. Dreaming and the exploration of the depths of the soul are more present than ever.

2000 marks the release of the mini LP “Third”. Working in collaboration with Stéphane Buriez (Loudblast, Lb Lab),  this album is more mid-tempo, and has a cleaner, more professional production, moving slighty away from their previous folkloric sound. The texts remain as introspective as one would expect from HIMINBJORG, dealing with the meaning of life, the behaviours of modern man and pagan traditions.

The album « Haunted Shores » follows in rapid succession in 2001: one of the group’s central pieces, created in a style completely different to the usual Black Metal stereotypes flooding the scene at the time . Showing the fruits of their experience, each track is impressive, not only regarding the melodies, but also in its composition.

2003 marks a return to a more violent and raw sound with the album “Golden Age”  under the Adipocere label, featuring a warlike mood and leading to spectacular on stage performances. Shortly afterwards, the album “Europa” rears its head, composed of a selection of high quality unique tracks. Following this release, the group presses “pause” for 4 years and puts the project on hold.

Coming out from hibernation in 2008, Zahaah, the group’s main composer, decides to bring HIMINBJORG back to life, recording a set of previously unreleased compositions dating back to 1996. The resulting album “Chants d‘Hier, Chants de Guerre, Chants de la Terre” (2009)  is released under his own label European Tribes. For the first time they feature French lyrics and the group moves back to their renowned intimate folk sound. Once again a pagan vision is projected within a renewed envelope. Touring for a further 4 years HIMINBJORG shares its vitality and stage presence with their fans.

Most Recently, in 2015, the album ‘Wyrd’ is launched onto the scene via European Tribes in France and Vegvisir internationally. Passionate and powerful, this album is filled with war cries and dreams and has been expertly produced and mixed at WSL studio by Zahaah and Patric “Darkhyrys” G.  . Special guests and friends featured include the Breton Christophe Morvan (Soldat Louis, Try Yann, Sonorien Du…), and the GasconBaptiste Labenne( Boisson Divine) for folkloric instruments.
2015 is already filing up for HIMINBJORG with concerts and collaborations, including a European tour, allowing the group to share this great new album in all of its intensity. 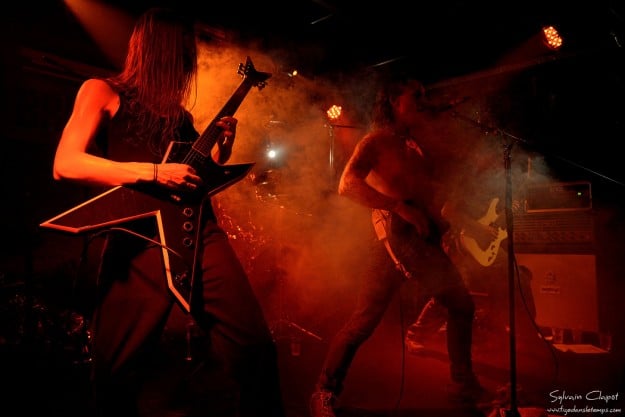